As I continue to participate in Random Acts of Publicity Week, I’m recommending Hourglass, the debut novel of Myra McEntire. 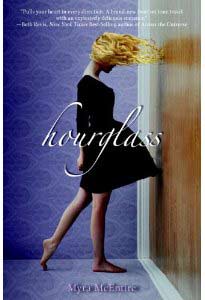 I picked up an ARC (advanced review copy, in case you’re wondering) of Hourglass from Egmont’s booth at the Texas Library Association convention this year. It was described by the lady who handed it to me as her “favorite” of their coming line — although she did say all Egmont’s books were great.

Hourglass appealed to me quickly. First, the cover art is really intriguing, as you can see for yourself on the right. Awesome, isn’t it? Doesn’t it make you want to know more? It did for me.

Plus, the Egmont lady told me something about the book that immediately made me want to read it — but I won’t spill it here, because it’s not on the jacket cover, at least on the ARC, and I don’t want to spoil the surprise for readers. Suffice to say, there’s some cool stuff going on.

What I can share is that the young adult novel is about 17-year-old Emerson Cole who sees things that aren’t there, like swooning Southern belles and long-forgotten soldiers. She wants them to go away, but whatever she does, she can’t. Then her well-meaning brother brings in a consultant from a secretive organization called Hourglass to help. But meeting Michael Weaver might change more than her future.

Myra’s writing does a great job of pulling you right into the story. It’s told in first person, and I wrote about the first paragraph, which beautifully sets up the tone for the book and draws readers in.

If there was one criticism of the book for me, it was that the story is filled with too many beautiful people. Everyone seems to be gorgeous — the heroine doesn’t think she is, but then guys can’t seem to take their eyes, and hands, off her — which made me feel slightly flumpy reading the book in my pajamas with cereal running down my chin. But how bad can a world of gorgeous people be?

I definitely recommend Hourglass and look forward to more books from Myra.

Have you read this novel? What do you think? Any books you recommend?

Want to know more? Read these next...