Percy Jackson and the movie

My husband and I braved the crowds and caught the movie adaptation of Percy Jackson and the Olympians: The Lightning Thief last night, and I’ve got some words of advice for writer Craig Titley and director Chris Columbus: Look over Angela Ackerman‘s seven deadly sins of novel writing; they’re important for screenplays too. 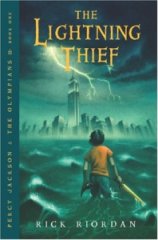 Percy Jackson in the book

Now, I’m a big fan of Rick Riordan‘s novel series, but I know that movies and books are too very different mediums, and each has different needs as far as storytelling goes. But that’s just technique. Books and movies both need plot points that flow logically from one to the next, dialog that sounds authentic and characters that are unique and real. In the case of The Lightning Thief, the book has those, the movie doesn’t.

It’s nothing new that Hollywood makes changes to books for the movie versions, and if it works for the storytelling on the screen and keeps the intention of the book’s story, I’m all for it. For example, Peter Jackson‘s The Lovely Bones begins differently than the original novel (although, Alice Sebold‘s brilliant original beginning is used in the movie, just at a different time) and this change works better for the movie. It keeps with the spirit of the novel but introduces the characters in a way that works better when the story is being told visually.

NOTE: Spoilers ahead, so if you haven’t seen the movie yet and want to be surprised, come back to this post after you’ve seen it. Otherwise, read on…

Titley and Columbus made many changes for the Lightning Thief movie, but unfortunately, they don’t seem to be for the good of the story. Instead, and this is just my opinion — I, of course, wasn’t in the room when the Hollywood suits made these decisions — many of the changes seem to be for money. There are the obvious changes, like Percy using the reflective back of an iPod to battle Medusa instead of a glass orb and Annabeth dialing up Luke on her Apple computer for instructions on the flying shoes instead of using an iris rainbow message, which was the preferred form of long-distance communication in the book. But, I don’t think a glass orb and an iris rainbow would have yielded the studio much money in product placement fees.

Percy Jackson in the movie

Sure, these are small changes, but then there’s the age of the main characters. In the book, Percy Jackson is 12; in the movie he’s 16 or 17. Why would Hollywood make this change? Maybe they thought older teens are the ones who come to the movies more and they wouldn’t be interested in seeing a movie about a 12-year-old. Funny, they were perfectly fine with paying to see a movie about 10-year-old Harry Potter. And it wasn’t just 8- to 12-year-olds who made the Percy Jackson novel series a bestseller. I read the books, and I’m … well, a lot older.

Ok, so these changes were maybe perceived as necessary for the movie’s profitability. What about the characters? I fell in love with Percy Jackson for his goofy wit. He’s not a pretty boy who instinctively knows how to wield a sword and defeat a giant minotaur. In the book, he’s funny, clumsy, dorky and needs help from all his friends. And the fun about Grover in the book is that he’s not a big strong protector, even though that’s his job. In the book, humor comes because Percy protects Grover from bullies at school then finds out Grover is there to protect him from monsters. This also provides a character arc for Grover, who must overcome his fear to become a true protector.

And what about settings? In the book, the kids have to battle Ares and Aphrodite in the tunnel of love, but in the movie, they battle a multi-headed monster in a replica of the Parthenon in Nashville. Kudos to Titley and Columbus for knowing about this replica (one of the great things about the Percy Jackson books is how Riordan blended the fantasy with real-life landmarks), but how did this change help the story, other than giving the Nashville Parthenon some publicity?

Other than these changes, let’s look at the deadly sins the movie committed:

There are other examples, but that’s not the point of this post. The point I’m trying to make is that great stories, no matter whether they’re written on a page or acted out on a screen, have things in common: logical action; interesting, realistic dialog; real characters making real choices to solve real problems, and learning something along the way.

Here’s a message to Hollywood: If you’re interested in making a movie out of a book, that book most likely has a story that attracted you to it. Sure, translate the story. It’s wonderful, thrilling, to see the visual interpretation of a book you love on the screen. BUT, trust the book, trust the writer and agent and editor and publisher who worked so hard to make that book what it is, to tell that story so well that it made you interested in making it into a movie. Be true to the story the book tells, and you won’t go wrong.

What do you think? Have you seen the movie? Did you like it, love it, hate it?

Want to know more? Read these next...