The writer’s journey is the best part 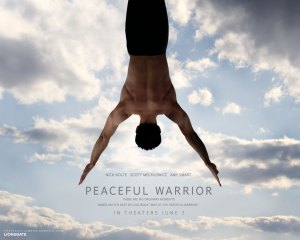 My husband and I watched the movie Peaceful Warrior last night — based on the book by Dan Millman, whose life is supposedly the basis for the book and movie — and I found myself nodding and smiling a lot. Not that I’m half as wise as the movie’s Nick Nolte character, but I understand the film’s main message, which is, the journey is the best part.

In the film, a college gymnast (Millman) is on track to get it all; he already gets the girls, but he’s aiming for Olympic gold too. A chance encounter with an odd older man (Nolte) makes Millman think he’s missing something and that he could be even greater. Along the way, he discovers that gold medals are not the most important things in life and that being the best you can be is really about letting go of your worries for the future and concentrating on the present.

It made me think of writing. I’m halfway through my third novel and, like many writers, I think ahead to the time that it will — hopefully — be published. The story is a bit experimental, a 10-year-old protagonist with some pretty heavy — adult — issues, and often my thoughts question whether a publisher will take on the book because of it. But it’s a story that I like, that I feel and want to write, and ultimately that’s what counts.

The journey we take when we’re writing our books is the best part. Although I’m not yet published as a novelist, I have been a journalist/editor for 19 years and have seen my name in print over and over again. It was thrilling the first few times, but then it’s over. What stays with me most from my career is the moments when I’ve written a particularly poignant lead and learned something really amazing during research for a story, like when I wrote about an art exhibit by Croatian children who used their painting as therapy. I wrote that story some, hmm, 13 years ago? And yet it’s one of the closest to my heart. And it’s not because of when I saw my name on top of it in the newspaper. It’s because of the journey I took for the article.

I imagine it’ll be the same when one of my novels is finally published. Sure, it’ll be thrilling for a while — a long while — but that will fade, as writer Anne Lamott describes in her great book Bird By Bird. The best part of my novel will be the time I spent writing it.

So, if you’re worrying about publication and looking ahead to seeing your words in print, stop. Don’t dwell on that, because if you do, you’ll miss the best part of your work — right now, when you’re writing.

Get personalized copies through BookPeople. They ship worldwide. Click here!

Be the First to Know!