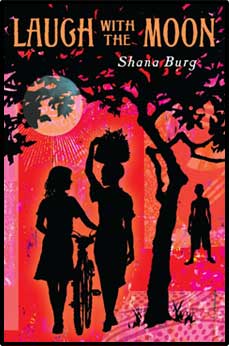 It’s launch day for the second novel from author Shana Burg, Laugh With the Moon

(Delacorte Books for Young Readers), and Shana has graciously stopped by to answer our writerly questions.

Partly based on her own experiences traveling to Malawi, Laugh With the Moon tells the story of 13-year-old Clare Silver, who feels that mourning her mother’s death is far more important than being dragged overseas with her doctor father. Mad that she has to spend 64 days in the African jungle, Clare must learn a new language and deal with new surroundings. As she begins to make friends, things get better, but she gets more heartbreak when an outing to see more of the country goes horribly wrong.

Laugh With the Moon is suitable for ages 10 and older and is already getting rave reviews, including a starred review from the School Library Journal. Shana’s success from her well-received 2008 novel A Thousand Never Evers

We posed our six little writerly questions to Shana, and her answers are as interesting as her books. Here they are: 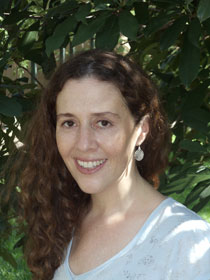 How did the story come to you? Characters? Situation? Whole thing at once?

As a graduate student in public policy, I found myself in Malawi, Africa, one winter tooling through the bush in a jeep with my driver, Norman, who later became a friend. Norman and I were investigating whether there were adequate learning materials such as pens and pencils and notebooks in the rural schools. However, we found that there were hardly any materials at all. Still, the children and teachers in the schools had incredibly creative ways of getting by with what they found. So, for example, children learned to write with sticks in the dirt. And they made letters with the mud from termite hills.

I went to Malawi back in 1997. When I came back, my sixth-grade students saw my pictures and were fascinated. That led me to think that American kids beyond my classroom would be intrigued by the way children in Malawi live. But I didn’t really have a story or a character in mind, until I began free writing from the point of view of an American girl who visits the country with her father. My main character, Clare, changed ages several times through many drafts until I finally found the age—thirteen—when she seemed real and right to me.

From your first inspiration, did you outline or jump in?

I jumped right in for the first few drafts. Once I had a character who I liked enough, I moved to an outline. My outline included a very short description of each scene, along with sensory details that I wanted to feature in that scene, the conflict in scene, and any key lines of dialogue. This launching off process of jumping in and then outlining was very helpful, but still, there were a million more drafts that followed. 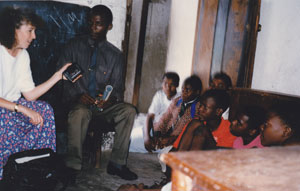 Which do you enjoy most, the first draft or revising?

I really like both for different reasons. The first draft is exciting. You think, “Okay, this time I’m going to get it perfect right off the bat.” But then you go back and read what you wrote, and reality sets in: “Nope! It’s going to take years again.” Good news is that when I wrote my first book, A Thousand Never Evers, the entire process from free writing the first pages to publication took me eight years. Now, I’m happy to say, I’ve halved that time with Laugh With the Moon. Four years.

Revising isn’t as tummy-turning with ups and down as the first draft, because I’ve already got something to work with, and I’ve already come to grips with the fact that this is going to be an uphill climb. I love revising because the characters and scenes you don’t need, peel away and what you’re left with is the stuff that really works.

Were there any scenes or plotlines that were written but got cut, and if yes, why?

Oh, funny you should ask that next. Yes, tons!! I have to say, one thing I’ve become a lot better at is being okay with letting things that I’ve written go, including sense or plotlines that I really like but I know, in my gut, aren’t working. I find that when I’m willing to cut, cut, cut, it’s always better in the end. By the time my manuscript is finalized, it only shows a small bit of the life that character has actually lived in all the previous drafts and scenes that have been cut.

What was your biggest challenge with this story?

The biggest challenge was updating my research to the present day from the time I had been in Malawi. I was very fortunate to work with two Malawian research assistants, who had access to the Internet and helped tremendously. I also reached out to many other Malawians, as well as Canadians and Americans, who were so generous with their time and expertise in answering my questions and translating words from Chichewa to English too.

When you’re done with a manuscript, how do you celebrate?

In my opinion, you’re never really done with a manuscript until it’s actually published. Until that time, there are milestones (like first draft, second draft, fortieth draft, copy edit, etc.), but it seems like there’s always another step, until you really and truly can’t make any changes anymore. To finally celebrate my pub date today, my husband and son and I are going to the bookstore to buy a copy of the book, and then we’re going out for dinner. I’ll also be celebrating at my launch party at BookPeople on Sunday, June 24 at 4pm. There will be live African music and Malawian crafts for kids. Everyone in Austin is welcome to join me!

Thanks, Shana. The launch party will be fun.

Shana explains more about the inspiration for her novel on Cynsations today, which is also giving away a copy of the book. So go there and enter.

Also don’t miss the trailer for Laugh With the Moon:

Laugh With the Moon Shana Burg

Check out all my books